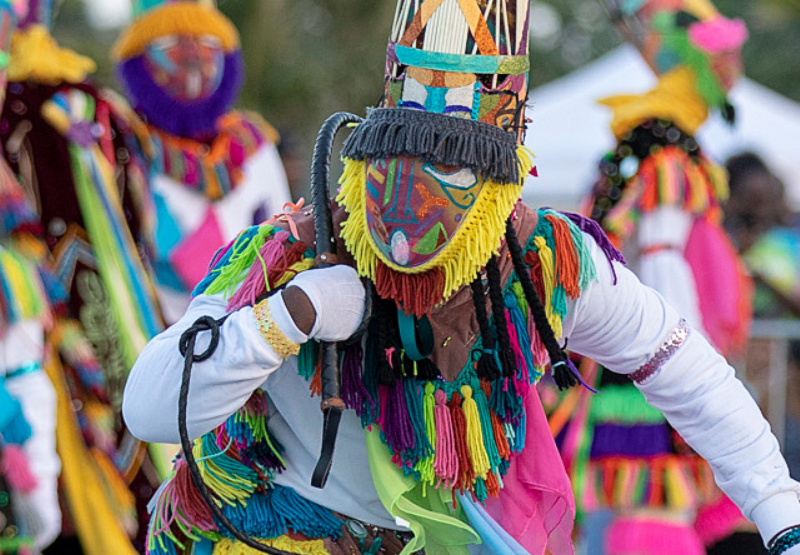 Gombey is a kind of combination of Bermuda’s traditional folk music and dance. It is the most famous in the island. It has its origins in three different cultures: British, West African and indigenous new-world. Gombey dancers are mostly male, performing in groups of 10 to 30 members. While this is traditional dance, all knowledge has been passed down orally, so Captains of each troupe basically define the direction and style.

All members of troupes have to follow instructions of Captain. So nowadays you can see tiny differences in styles between troupes. They all have their well recognizable costumes, so you can distinguish them by colors, headdresses, beats etc. Although I said it has its origins in three cultures, its rhythm has origin in specific type of drums in Africa. Some experts also say that Gombey is actually the Bantu word for rhythm. Gombey is also similar to Mummers, some kind of folk dance that comes from Afro-Caribbean style of celebration.

Let’s get back little bit into past

If you ever had problem with understanding some occurrence, or phenomenon or tradition from present, you should look for its origins and you should research its history. History can help you to better understand present and to even better predict future.

It is very interesting that, in spite of Gombey being traditional dance, it wasn’t allowed back in XVIII and XIX century. There were multiple reasons for that. Some sources told us that authorities were afraid of possibility of criminals hiding behind mask. Maybe it sounds funny, but after slave revolt in 1761 the Government even officially forbad Gombey. So Gombey wasn’t really accepted in the society at the beginning. It is actually often the case with some innovations and unusual things. People are generally scared of something extraordinary, but in the end of day, extraordinary finds its way to become value everyone seeks.

Only on particular occasions such as holidays, was Gombey allowed at all. But the Law was very strict, and today we can see from newspapers from that period, that punishment for performing Gombey without permission was relatively tough. According the tradition Gombey was and is mostly performed during Boxing Day, Easter, New Year, Bermuda Day, etc. Nowadays, in modern era, we can see performances of Gombey at football and cricket matches as well. Of course, almost none festival can’t be held without Gombey. There were many population movements on the territory of nowadays Bermuda. Spaniards, Irish, English and other people was arriving and leaving. In the end only Native Americans, Irish and some English left. They have built new single demographic. These people later made something we today know as Gombey.

The parts of Gombey costumes

It is very interesting how Gombey dancers keep their costumes in good shape. As I mentioned they mostly perform Gombey dance during Boxing Day and other holidays. They go out on streets, and they attract crowds very fast. According to tradition, crowds should give Gombey dancers a little bit of money. That money can only be used for maintaining costumes. If you have never seen Gombey costume before, you should definitely look for couple of pictures on Internet. Even better if you can visit Bermuda during some festival and see it in live. These costumes are very, very colorful and they are made of many pieces. It is not easy to make all those pieces. Here are pieces which build Gombey costume.

Its a great tradition and it certainty makes for wonderful photographs.