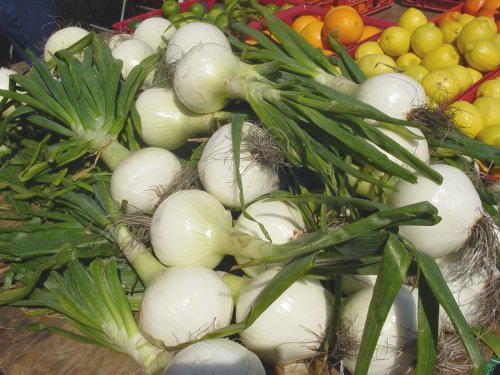 If you’ve ever been curious why Bermuda is sometimes affectionately referred to as ‘The Onion Patch’, or its residents as ‘Onions’ then wonder no more, for the nicknames reflect a vegetable grown on the islands which was once both famous and sought after in other parts of the world. Even the infamous Mark Twain recognized the importance of the unique Bermudian onion, describing the crop as being both ‘perfection’, and the country’s ‘pride and joy’, ‘jewel’ and ‘gem of gems’ – high praise for this unique sweet tasting vegetable which some claim can be eaten like an apple!

By the mid 19th century Bermudians were growing around 330,000 pounds of onions a year, and by 1875 over 4000 tons of Bermuda onions were being exported to America, so how exactly did this amazing commercial moneyspinner come about?

The History of the Bermuda Onion

There are plenty of tales claiming to pinpoint the moment this humble vegetable, which was destined to bring the island unexpected fame and riches, was first planted, and it’s difficult to be sure which are the most accurate. What can be gleamed by comparing lots of accounts is that although some version of the onion was imported and grown sporadically on the island sometime around the early 17th century, no particular effort was made to do more with the land than simply tame it, until a couple of centuries later.

The introduction of onion seeds from the Canary Islands, along with input from visiting experienced onion farmers proved to be the turning point for the Bermuda onion, and we know that by 1830 fifty acres of this small island were devoted to the task of growing them. The pleasing result was a sweet onion said to be so tasty because of the pleasant semi-tropical climate and magical soil.

It was important that the valuable onion crops were protected at their delicate seedling stage, and slave children were tasked with the job of being human scarecrows, chasing hungry birds away day in and day out.

By the 19th century onions had become an established part of the nation’s farming economy, overtaking shipbuilding when the industry went into decline as steels ships became favoured over wooden vessels. As American businessmen got to know about them orders for more started to flood in, and onions soon became a major part of the island’s income sources, as well as cementing US – Bermuda trading relationships. As the 19th century drew to a close American vegetable importers were ordering in bulk, impressed by the look, quality and taste of Bermuda’s onions, and the SS Trinidad hauled over 30,000 boxes of them back to the US every single week!

Onions quickly became Bermuda’s major export crop, with hundreds of farmers realising the market potential in the US and, later, the UK. By the middle of the 19th century Bermudians became known as “Onions” and Bermuda itself was widely referred to as “The Onion Patch”. An unnamed American businessman-entrepreneur urged his contacts to get into importing Bermuda onions as their value was on a par with the best silk and satin.

By the end of 19th century, major American vegetable importers looked to the island as a major source of onions and the ship SS “Trinidad” was carrying more than 30,000 boxes full of onions to the US on a weekly basis.

What exactly are Bermuda onions, and what makes them so special?

Bermuda onions come in a number of varieties, including Crystal Wax, White Bermuda and Yellow Bermuda. Unlike red or yellow onions they have flat tops and a mild, sweet taste, as well as a low sulfur content, which makes them extremely palatable when eaten raw in sandwiches or on burgers. However, they are also excellent for cooking, especially in dishes where a gentler, more subtle onion flavor is desired. They produce spring onions around 30 days after the seeds are planted, and a mature onion ready for harvest after around 95 days.

How the Bermuda onion fell from grace

It’s important to say that on their home turf Bermuda onions are still carefully cultivated, and very much enjoyed by the majority, but somehow American buyers fell out of love with them. It wasn’t that the taste suddenly lost appeal, or the quality dropped, or even that the market for onions disappeared – ultimately the Bermuda onion was a victim of simple economics, aided by the impact of war.

A cunning copycat move wins out

Commercial shipping was almost non-existent during World War One, so the export of Bermuda onions had to be put on hold. It never really recovered, as even though exporting was resumed the new import duties America was charging raised costs and negatively affected sales. Plus they faced competition from Texan farmers who had spotted the opportunity to get a very large foot in the door of the onion market around twenty years previously. By importing the seeds from the Canary Islands themselves surely they could grow the type of onion the country was clamouring for, and sell it at a better price than their Bermudian competitors could. They made the right decision for sure, as after WW1 thousands of train carloads were being shipped from Texas to locations around the country, and overseas. By 1920 Texas was supplying more Bermuda onions than Bermuda was!

The Texan’s face a dilemma

Frustrated Bermudians hampered by slow shipping times couldn’t compete, and saw their onion export numbers drop from 153,000 crates in 1914 (before war broke out), to a measly 21,000 crates in 1923. Interestingly, around this time the Texan farmers faced their own potential downfall after the supply of seed from the Canary Islands became problematic, there simply wasn’t enough quality seed to meet the huge demand. The Texan farmers weren’t deterred; instead by 1925 they were buying Grano onion seed from Spain, eventually cultivating new strains to replicate the Bermuda onion seed more closely, with the added bonus of now having seeds which produced much larger yields of onions than ever before.

In the 1930s the Bermuda Trade Development launched several campaigns to win back foreign favour in their onions, including one inventive scheme which saw postcards being sent to overseas vegetable buyer contacts. The text of this missive praised the qualities Bermuda sunshine and coast air added to onions, cleverly insinuating that anything else was a mere copy of the real thing. Unfortunately this heartfelt effort came to nothing – the axe had finally fallen on the export of Bermuda onions.

Texas still produces onions which are marketed as Bermuda onions to reach the huge market of fans they have, but these days the state has competition from growers in California, Washington, Hawaii and Georgia. Meanwhile, back in Bermuda the locals aren’t sore, after all, they still have all the ‘real’ Bermuda onions they could ever want.

Why not try making these really simple and extremely delicious recipes which make the most of Bermuda onions.

Bouquet garni (buy ready-made, or tie some fresh thyme,  parsley, and a bay leaf together)

Thick slices of bread good for toasting, and any cheese good for melting

Perfect for a light lunch or supper, this salad makes the most of raw Bermuda onion.

This third and final recipe most definitely makes Bermuda onions the hero.

A sprinkle of ground pepper

2 cups/425 g of grated cheese (preferably plain Havarti, but you can experiment!)

TIP: If you do need to delay cooking this amazing dish stop after step 6, cover with foil or film, and keep it in the fridge for up to 24 hours. Then simply add the wine and cook as directed.

In Bermuda folklore has it that roasted pieces of these famous sweet white onions are capable of curing earaches, amongst other ailments, and onions in general have been utilised for hundreds of years in the field of traditional medicine to treat pretty much anything and everything, but especially bacterial infections. These claims may not too far from the truth.

Modern food science experts are well aware of the goodness vitamins bring to the human diet, as they are packed with vitamins A and C, and potassium, as well as being ridiculously low in calories. One medium Bermuda onion (around 150g) has about 60 calories, zero fat of any kid, provides 12% of an adult’s recommended daily dietary fibre intake, and even a little protein, calcium and iron!